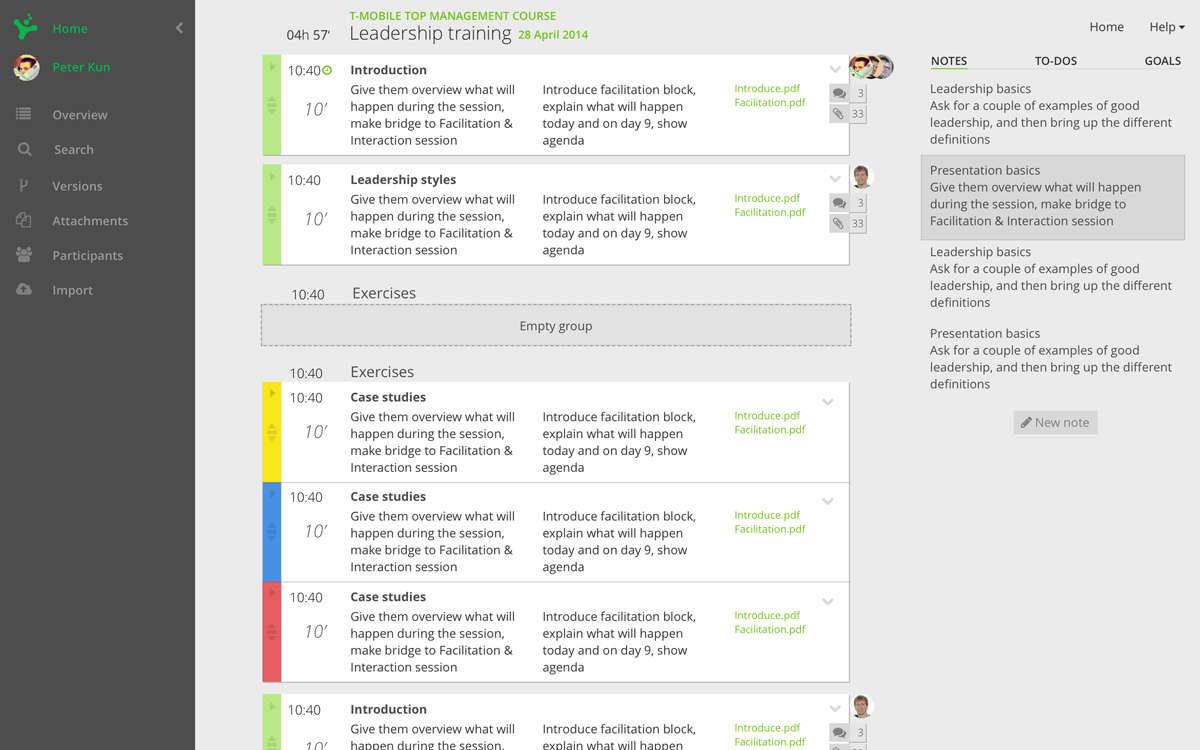 ##Brief For a couple of years I have been conducting trainings and workshops in volunteer and professional settings. A big realization as a designer was, that there are no tailored tools for the needs of trainers: most of the trainers are using Excel or Word to plan their activities, and wouldn’t even imagine how painful these software are for planning trainings.

Together with some friends from the same background, I started a hobby project – TrainedOn – to create an online platform for trainers and to create a better application to plan training activities.

##Design rationale Replacing a well-established part of a workflow is a design challenge: the users don’t even notice the flaws of an imperfect solution, and the proposed alternative must excel in user experience to distrupt old habits for favoring a new tool.

The design of the training planner is focused on such solutions which are familiar for the users from other products. The main pillar is the usage of blocks as a modular unit to build a training schedule: training itself is already organized around learning blocks, and different blocks are widely re-used in other trainings.

These considerations resulted in a Training Planner, which has inspirations from digital calendars (blocks of time), Post-It notes (easy to shuffle, draggable elements), and books as a printed medium (side-notes for doodles, to-dos).

I prototyped the interactions with a video prototype, which was served to an IT developer as specifications. For the user interface, I created various mockups, from which the winner design was chosen together with the team. This stage got developed into an MVP (Minimum Viable Product), which is currently accessible online as a public beta.

Currently I’m working on a facelift for the visual design, which is based on learnings from user research and real-life usage of the product. Along this facelift, I’m also developing a user experience strategy for the product, to allow expansion to mobile viewports and to incorporate upcoming features on the user interface by a plan.

##Outcome TrainedOn is in a public beta stage right now, publicly accessible to anyone. So far the user feedback has been highly positive on the interactions (the field I’m responsible for).